You are here: Home

This project began in the early 1990's when a couple of Southland Branch, New Zealand Deerstalkers Assn members caught a doe at Mason Bay using one of the deer traps built by Mr Tim TeAika who was the last leaseholder farmer on Stewart Island.

This doe was shot by another hunter five months later. She was only 3 - 400 metres from where she had been tagged.

With various writers claiming whitetail travel long distances we set about trying to establish if this was fact or fiction.

In 2000 with the help of helicopter pilot Steve Gamble four does were captured, three were released with radio collars and the fourth (#4) with just an eartag. Each animal captured and released has an individually coloured eartag. A number of other animals have been captured by trapping.

Radio tracking stations were established on Big SandHill and Island Hill. Radio signals were plotted by compass and the intersection of the two signals established the location of the animal.

Doe #3 lived for over twelve months in a small home range, probably less than a square kilometre, just east of Big SandPass is indicated in the yellow circle.

She was regularly tracked by her radio signals and although a many hunters used the old fenceline  which runs through her home range she was never reported as being sighted by hunters. 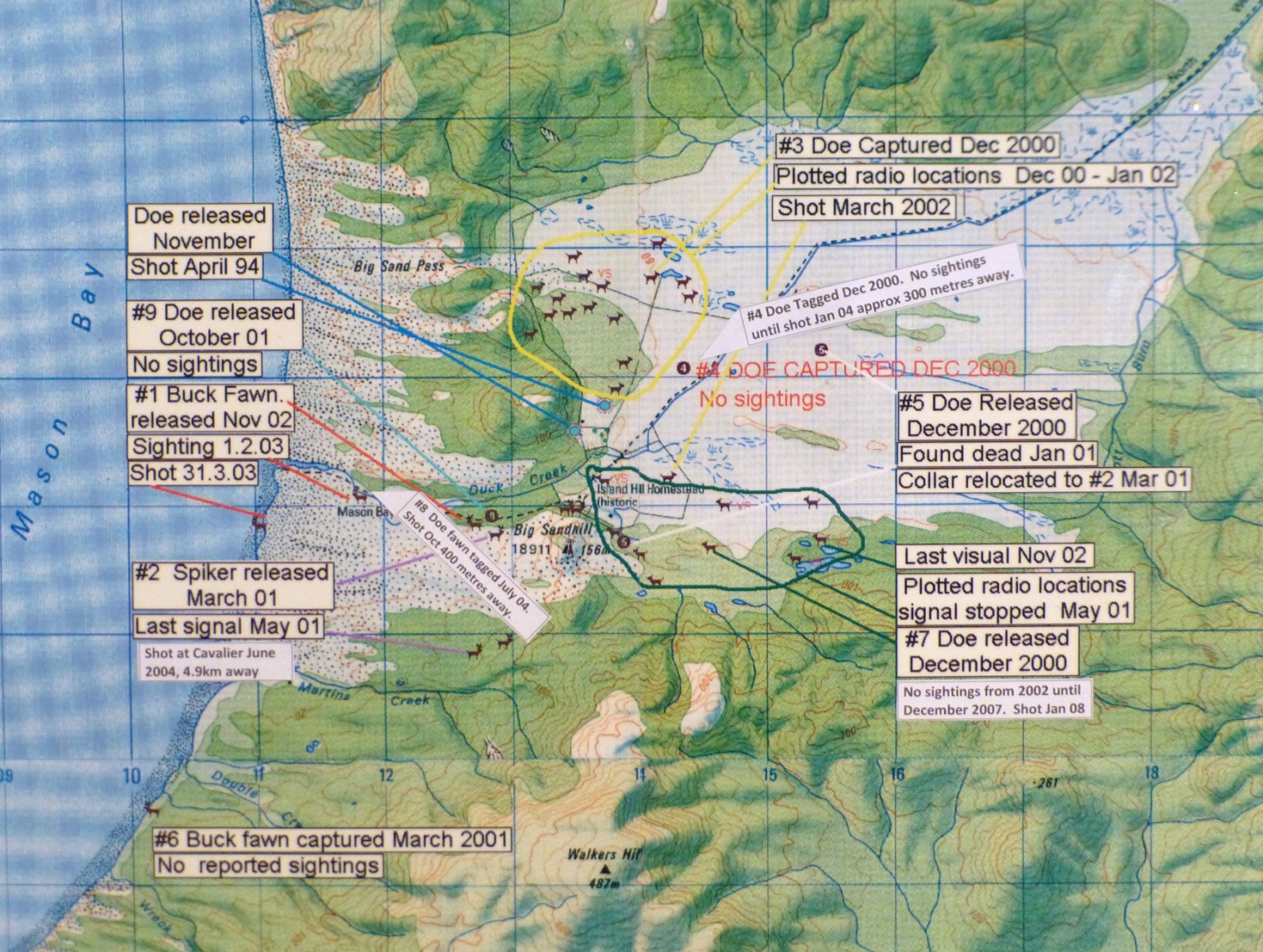 In March 2002 she was shot near the old airstrip. This was the only time we know she had moved out of her home territory.

Doe #7 was fitted with a radio collar. This stopped transmitting after about 5 months. This doe has been seen a number of times by hunters and trampers up until in November 2002 around the Mason Lakes area. She then disappeared until she was had a lucky escape from a bullet in December 2007 but was shot by a Halfmoon Bay  hunter in January 2008 still in the same area..

#5 died shortly after capture. The collar was recovered and fitted to a spiker (#2) in March 2001

Doe #4 was shot in Jan 2004 about 300 metres from her capture point. No sightings were reported in over three years she lived in this area. 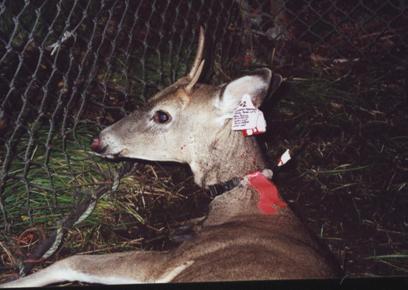 Buck #2  was tagged in April 2001 and was radio tracked on 4 occasions. Since May 2001 there were no signals or sightings until the buck was shot by a hunter in June 2004. When killed he was just north of Cavalier Creek about 4.9km. from his capture point. His antlers shown below are unimpressive for a buck that was at least 4 years old. 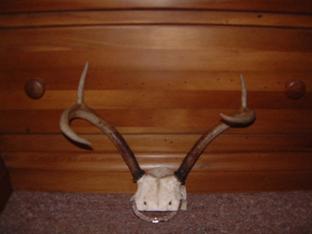 Also in March 2001 a buck fawn #6 was captured and released near Double Creek. No sightings of this animal have been reported. 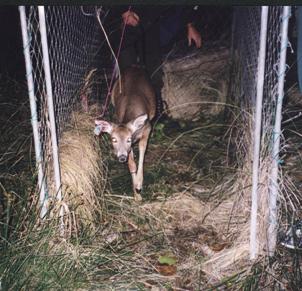 Doe # 9 was captured and tagged in September 2001. There have been no reported sightings of this deer.

In November 2002 another juvenile buck #1 was tagged and released in Duck Creek.

In January he was seen further down the creek and in March 03 was shot by a hunter on the beach about 400 metres to the south.

In June 2004 (#8) a doe fawn was captured. She was shot in October the same year about 400 metres from capture point.

Clearly the conclusive evidence is that Whitetail Deer, and particularly does, do not travel very far and seem to have a home range of less than a square km.